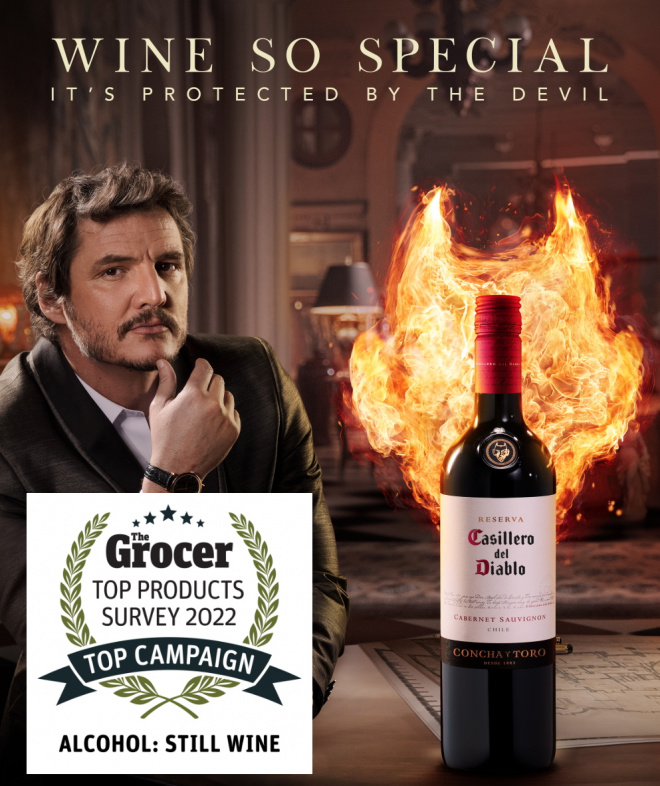 The ad faced fierce competition this year, with new campaigns introduced across a number of wine brands, so this represented an even greater achievement for this well-established brand.

"Smouldering Chilean-American actor Pedro Pascal fronted the wine brand’s biggest TV push to date. The high-production ad reached nearly half of British middle-class audiences an average 3.4 times, with big budget spots during primetime shows such as The Celebrity Great British Bake Off. An activation with Sky Cinema saw Pascal present his ‘Top Films for a Great Night In’, furthering the reach of this classy campaign."

You can watch the ad here.

Guess who's back? The World's Greatest Thief returns to the screen as Pedro Pascal stars in The Last of Us - full story via @AsianTrader https://t.co/otbRvpKb4J @CasilleroDiablo https://t.co/xsZNUevzcf

Great to see @conosurwines Bicicleta Viognier in @JaneClareWine 's top bottles of 2022: Jane says "here we have the next best thing (to Condrieu) at a fraction of the price... a bottle that's bound to please." https://t.co/TyweS5gxii

.@conchaytoro is proud to be included in the 2022 Dow Jones Sustainability Index, the eighth consecutive year, thanks to our leadership in sustainability and environmental care, which is part of our commitment to protect the planet for the future. https://t.co/4RKzS1SrtJ

Today's the day for #1000xbetter as B Corps gather to celebrate with @BCorpUK reaching an amazing 1000 B Corporations in the UK. @ConoSurWines are proud to be pouring our Organic wines https://t.co/3ZNiSwDjzf

.@ConoSurWines are delighted to support @BCorpUK as they celebrate passing 1000 B Corps in the UK - we will raise a glass together! #bcorps #1000xbetter https://t.co/ZGo94zWJYR

.@teamdb reporting on the launch of Vina Don Melchor 2020 in London last week - "the best expression yet" https://t.co/7u0NOsCq5H

RT @wstauk: The mood across the UK alcohol industry is bleak following the Treasury’s U-turn on a duty freeze. Businesses are bracing them…

RT @wstauk: Over the past 5 years, during a stable period for alcohol duty, revenue has increased by 18%. Despite the challenges of Brexit,…

A useful @jancisrobinson piece about what it means to be @BCorporation, and which are the (currently few) wine companies who have been B Corp certified so far https://t.co/ErmvTiDQmG